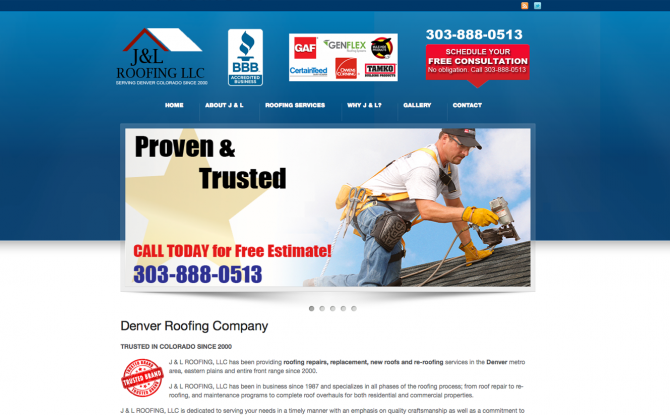 Minds Over Media, a leading Denver web design and SEO company, has launched a new website for J & L Roofing, LLC in Denver, CO. J & L Roofing had several bad experiences with out of town telemarketing web design and SEO sales companies such as Yodle, 24 Prime, and 411 Local Advertising. They hired Minds Over Media to create a professional image, brand, and presence on the Internet.

The article below appeared on ZeroHedge.com, one of my favorite sites for real information on what is really happening in the world. This article had to do with Facebook, it’s “users” and ads, very enlightening indeed. Beware of what you’re doing with Facebook ads!

A month ago we explained in gory detail the growth of “click farms” where nothing is what it seems, and where social networking participants spend millions of dollars to appear more important, followed, prestigious, cool, or generally “liked” than they really are. The following excellent walk-through of just how the fraud works is concerning when the entire US stock market appears propped up by an ever-shrinking layer of “social media” and “cloud” faith that this time it’s different and no Friendster or MySpace.

As we noted previously,

Social networking has been the “it” thing for a while: for the networks it makes perfect sense because they are merely the aggregators and distributors of terrabytes of free, third party created content affording them multi-billion dollar valuations without generating a cent in profits (just think of the upside potential in having 10 times the world’s population on any given publicly-traded network), while for users it provides the opportunity to be seen, to be evaluated or “liked” on one’s objective, impartial merits and to maybe go “viral”, potentially making money in the process.

Of course, the biggest draws of social networks also quickly became their biggest weaknesses, and it didn’t take long to game the weakest link: that apparent popularity based on the size of one’s following or the number of likes, which usually translates into power and/or money, is artificial and can be purchased for a price.

And once the prevailing users of social networks grasp that one of the main driving features of the current social networking fad du jour is nothing but a big cash scam operating out of a basement in the far east, expect both Facebook and shortly thereafter, Twitter, to go the way of 6 Degrees, Friendster and MySpace, only this time the bagholders will be the public. Because “it is never different this time.” The only certain thing: someone will promptly step in to replace any social network that quietly fades into the sunset.